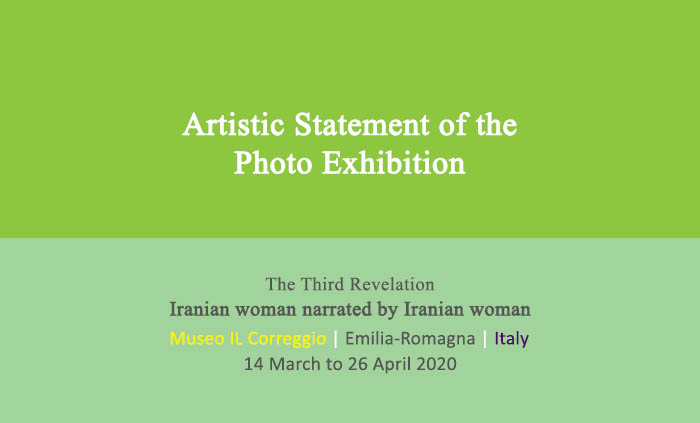 The Statement of the Photo Exhibition published.

Indeed, this only is a section and a segment of the convoluted tale of the Iranian woman. This is only a part of that which you can see. This is a look into the hidden universe, desired world, aesthetics and the very dreams of the Iranian woman. What you see in the media about her is not all there is to the truth. Even television and cinema, as the most important instances of the media in the country, do not represent the same image, content as well as fictional and narrative subjects and notions with regard to her. The motif of a girl or a woman who is in love, is a warrior, sacrifices herself, is oppressed, and is a heroine as well as other roles in these two forms of media do not have an exact one-on-one correspondence and verily are not the same as each other. She herself also does present varied faces at home, workplace, social networks, university, marketplace, advertisement and the like.
This pluralism is deeply rooted in various internal and external factors as well as the situation and the audience which are not predominantly to be chosen, namely, politics, religion, culture, geography and education. But, what is the reason for this convolution? In the role of the transmutation of a historical intelligence, the Iranian woman has become consubstantial with water, having a symbolic and mythical quiddity which has different representations when interacting with various phenomena. At times, she is the mirror itself and the repetition of the love and hatred, beauty and ugliness, as well as the good and bad in whatsoever standing before her. Once in a while, she is as frozen and solidified as ice. Sometimes, she gives life like dew. And, occasionally, she strikes a discordant note like spring cloudburst. Once in a while, she is concealed in the midst of hijab like a mystery and same as a primordial gemstone. And, from time to time, like the one and only illustration of fortune, she transmogrifies into a beloved who deludes and deceives the hermit. At times, she is a surreptitious mystery that is astir to reach the state of manifestation. And, sometimes, she is the dancing reflection of the light upon the undulant surface of an old pond.
In these exhibitions, forty-three Iranian artists will narrate themselves amidst their water-like quiddity, inviting you to observe the flowingly continuous and continuously flowing sorrow of these days of their homeland. Welcome.